Charitable giving is up – way up, according to the new Giving USA yearly report released in June. 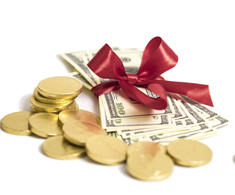 Charitable giving increased 7 percent to nearly $358 billion in 2014, more than any year in the 60-year history of the organization’s Annual Report on Philanthropy. The total slightly surpassed the previous high of $355 billion in the pre-recession year of 2007.

There were four major sources of total giving:

A number of gifts of $200 million or more were made last year, many by young tech entrepreneurs, which impacted the total considerably. Many of those gifts were to foundations.

Individual giving is impacted by disposable income, wealth and growth in the stock market, according to the report. Corporate giving is driven more by pretax profits and gross domestic product.

The recipients of charitable gifts in 2014, according to the study, were led by religious giving, which reached a new high of nearly $115 billion. Despite that high number, the percentage of giving that goes to religious organizations has decreased dramatically during the past three decades, from 53 percent of all donations in 1987 to just 32 percent today.

The nine categories of organizations receiving the most gifts in 2014 are listed below. Six of the nine recorded record high gifts.

This article was originally posted on August 10, 2015 and the information may no longer be current. For questions, please contact GRF CPAs & Advisors at marketing@grfcpa.com.

8(a) Certification and Sole Sourcing – What Does it Mean and Do You Qualify?