Mobile giving took a big leap in 2014. Almost 10 percent of all donations were made through mobile devices.

When the number of people who receive the notice via mobile but donate on a desktop are included, the percentage climbs to 17.6 percent, according to a study by the fundraising software firm Blackbaud.

That translates to one in six donors using mobile devices. Almost half read emails on mobile devices, another sign that electronic fundraising outreach is reaching people on their phones. 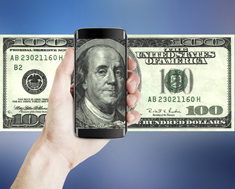 Charitable giving overall reached a record $358 billion in 2014, above pre-recession levels for the first time. Individual giving was up in 2014 by 5.7 percent, according to Giving USA 2015.

The sheer saturation of mobile devices in daily living points to mobile giving as a trend that will only accelerate. According to Pew Research Center, about 64 percent of American adults owned a smartphone in 2014. Cell phone ownership overall has reached 90 percent of the population and almost half own a tablet device.

Increasingly, people are becoming dependent upon their smartphones for Internet access. This means that email, web browsing and messaging are all functions used on a mobile device. Pew’s information correlates with the Blackbaud study, with 9 percent reporting that they donated via cell phone.

The 2010 earthquake in Haiti was one of the first significant events to report widespread engagement via mobile devices. For almost three-quarters of mobile donors, this was the first time they had used texting to make a gift. Many reported that this was a spur of the moment decision and the giving impetus spread rapidly through mobile networks.

Offering the ability to give via mobile has two main advantages. One is that donors have their phones with them at all times and the other is that easy-to-use technology takes advantage of impulse giving and on-the-spot payments.

Contrast this with the old method of writing a check and mailing it. The more time that elapses between appeal and action gives rise to second thoughts or simple forgetfulness.

npENGAGE magazine also found that donors were buying memberships (17 percent) and signing up for events (19.6 percent) on mobile devices. The implications for donor engagement are obvious – that many people are choosing to use devices rather than desktop computers or the mail.

Most initial mobile giving platforms use a text-to-give mechanism, which means that donors text a certain word to make a gift. For the Haiti earthquake, it was HAITI to make a $10 gift to the Red Cross. The donation is added to the donor’s telephone bill.

While useful in times of emergency, text-to-give has limitations regarding ongoing use and reporting, nonprofits are finding. Costs are often an issue.

Other technologies are being developed that will likely nudge aside text-to-give. One example is Givelify, which has a mobile application interface. This interface allows a donor to select the charity, direct the gift to specific needs or campaigns, and securely make a donation. Givelify charges 2.9 percent and 30 cents per donation to process the payments, with next day deposits.

With the use of mobile devices for giving and other functions related to nonprofit participation, organizations need to ensure that their webpages and communications are mobile-friendly. Since this technology is offering unprecedented ease of giving and outreach, it doesn’t make sense to miss out.

This article was originally posted on October 28, 2015 and the information may no longer be current. For questions, please contact GRF CPAs & Advisors at marketing@grfcpa.com.