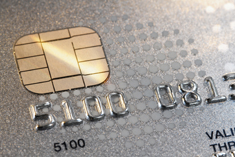 Credit cards containing microchips that have been deterring crime in Europe for years will finally make a widespread appearance in the United States beginning this fall.

By the end of 2015, nearly 600 million microchip credit cards should be issued in the United States, with 60 percent of retail locations ready to accept them, according to creditcards.com.

Developed in Europe, EMV – which stands for Europay, Mastercard, Visa, the companies that originally created the technical standard – is a chip-based technology that replaces magnetic strips and makes the counterfeiting of stolen cards virtually impossible.

The United States is the last of the G-20 countries to implement the use of EMV cards. England began using them in 2004 and saw a one-third drop in overall card fraud. Counterfeit card fraud fell 91 percent in France in 2005, and fraud from credit card theft fell 98 percent. Canada saw a 73 percent drop in debit card fraud when EMV cards were implemented in 2012, according to Gemalto digital security company.

Implementation has not taken place earlier in the United States because it initially didn’t face the level of fraud found in Europe because American retailers do immediate online verification of credit card purchases, whereas Europeans often did not verify them until the end of the day, according to Forbes magazine.

Some American retailers also balked at the price of implementing the system, and converting to the microchip in the United States was more complex than in many countries because of the size and fragmentation of the U.S. banking market. But as the fraud problem grew in the United States, and U.S. travelers abroad couldn’t use credit cards that did not have a microchip, U.S. credit card companies began to look more seriously at implementing EMV technology.

Companies not using EMV technology will be held responsible for fraudulent purchases, not the credit card companies or issuing bank, according to requirements of Mastercard, Visa, American Express and Discover.

Most cards require only a signature, but the future may bring the requirement of a pin number too, which will increase security. Chip-and-pin cards are the norm in most European countries.

The technology should help to prevent some of the large-scale data breaches that have plagued Americans, such as the Target breach, in which 40 million cards were compromised. While the technology won’t prevent data breaches from happening, it will help to thwart the amount of profit the thieves can make.

Rather than swiping an EMV card, the microchip end of the card is inserted into a small EMV terminal, the cost of which is approximately $500. Because one is required for each checkout, the investment can be expensive for merchants. Businesses may also rent terminals from credit card processors.

Those consumers with cards expiring before year-end will be the first to receive their microchip cards. Different credit card companies will have different rollout plans. Cards initially will still contain the magnetic strip also for use in stores that do not have EMV equipment.

Unfortunately, as microchip cards reduce in-store fraud, particularly in the area of card counterfeiting, thieves move to other means.

Card-not-present online purchases – online, mail and telephone purchases – as well as online gift cards have become the target of increased fraud in countries that have adopted the EMV cards.

This article was originally posted on August 3, 2015 and the information may no longer be current. For questions, please contact GRF CPAs & Advisors at marketing@grfcpa.com.

8(a) Certification and Sole Sourcing – What Does it Mean and Do You Qualify?

An Easier Way to Claim a Home Office Deduction