Parties embarking on merger or acquisition negotiations necessarily must share confidential information so they can accurately evaluate the prospects for a deal.

Prospective purchasers of a business usually are asked to sign confidentiality agreements before the seller will disclose information relevant to the possible merger or acquisition. 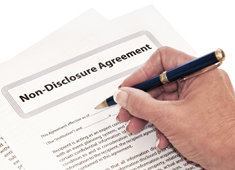 Agreements may be “one-sided,” allowing one party to reveal secret information, or “two-sided,” permitting both parties to share information.

When entering into negotiations for mergers and acquisitions, one of the first things to be negotiated is the confidentiality agreement. A qualified attorney should draft the agreement.

An important aspect of a nondisclosure agreement is describing what information will – and will not – be classified as secret. The discloser often wants to protect as much as possible and to restrict the disclosee from sharing information with anyone.

The disclosee, on the other hand, often wants as much freedom as possible to share the information with advisers, consultants and others who will play a role in evaluating the discloser’s business. Deciding what is covered by the agreement is an important part of negotiating the nondisclosure agreement.

There can be pitfalls in using boilerplate or generic NDAs without tailoring it to the particular transaction.

Ambiguous definitions of information that is to be protected also can present problems in enforcement. The agreement may need to include exceptions to nondisclosure, such as information that pertains to the confidential information but also is already public.

A generic agreement that simply restricts disclosure to “third parties” may be inadequate. Will such a restriction permit disclosure to advisers and consultants who are assisting the disclosee?

It is helpful to consider the practical details of distribution of confidential information and draft restrictions carefully to regulate the flow of information that results from the disclosure.

Clauses may address directly whether disclosure is permitted to all employees of the disclosee or just those working on this transaction. Permitting disclosure to third-party consultants can create problems because consultants who were not parties to the NDA may not be obligated to protect the information.

In some cases, permitting such disclosure could be interpreted as putting the confidential information into the public realm, thereby making the NDA unenforceable. Contract rights in general are assignable to other parties absent provisions in the contract that prohibit assignment.

It may be wise to include a non-assignability provision in a nondisclosure agreement to prevent rights under the agreement from being assigned to someone the discloser would not want to have access to confidential information. Provisions relating to enforcement, such as including attorney fees as damages or an agreement to arbitrate disputes, may also be considered.

An important feature of an NDA is a defined time period during which the information must remain confidential.

For example, one possible interpretation when time limits are not specified is a time limit that is reasonable under the circumstances. Failing to specify time limits creates considerable uncertainty as to how the agreement would be interpreted and its enforceability.

Setting reasonable time limits, in light of the nature of the information, is a good idea. For example, trade secrets may need to be protected as long as they remain trade secrets, but confidentiality of other business data may be useful for only a short period of time.

Because many courts focus on time limits when addressing enforceability issues, it may be wise to tailor time limits reasonably in light of the nature of the information being protected to increase the likelihood of enforceability.

Why Nonprofits are Reluctant to Report Fraud