One in three people will return at least one gift they receive this holiday season.

Last year, more than $60 billion in gifts were returned. Nearly $3 billion of them – 4.6 percent – were fraudulent returns. And the number is expected to rise this year. 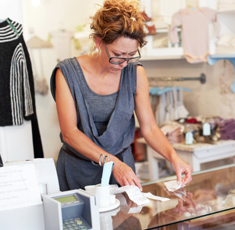 No doubt about it, return fraud is a major problem for retailers. It is considerably higher during the holidays because of the increased number of returns, more seasonal, inexperienced sales clerks, and more lenient return policies by many retailers, according to the National Retail Federation.

For the entire year of 2012, fraudulent returns were 3.4 percent of all returns, or nearly $9 billion, the federation’s 2012 Consumer Returns in the Retail Industry Report found.

How do thieves fraudulently return merchandise?

The most common way is through shoplifting an item and then returning it for cash. Another method is called “price arbitrage” in which similar items are purchased, but the labels are switched and the cheaper item is returned with the receipt of the higher one.

A growing problem is a practice called “wardrobing” in which a customer buys, for instance, a fancy dress, wears it out, and then returns it. Some customers even purposely damage the dress to make the return seem more plausible. This type of fraud is particularly common during the holiday party season, and also includes men’s apparel and jewelry.

Electronics retailers are also hit for video cameras to film special events like weddings and large flat screens to watch, for instance, the Super Bowl. Once an item has been returned, the chance of selling it again is reduced dramatically.

Here are the 2012 figures of how many retailers experienced specific types of return fraud:

Employee fraud or collusion with outside person
80.7%

The old adage “The customer is always right” is still alive and well in the retail industry. Many stores are leery of toughening their policies for fear of losing customers. In fact, the retail federation survey found that, while most stores will keep their return policies the same as last year, more than 10 percent will loosen their policies this year to attract more shoppers.

But some retailers have strengthened their policies, particularly in the area of wardrobing. Bloomingdale’s, for instance, has begun to attach plastic tags in visible places on higher-priced dresses and will not accept a return if the tags have been removed.

Requiring a photo ID for returns, especially when there is no receipt, is another way retailers are fighting back. Some stores keep track of individuals who have an inordinately high number of returns.

“Cross channel” returns, in which items purchased online are returned in the store, is also a rapidly growing problem with at least 4 percent of those returns fraudulent.

One method more and more retailers are using to fight return fraud is RFID (return frequency identification), in which a unique code is assigned to every item in the store. The code on the receipt must match the code on the item, making it impossible to falsify receipts or to switch items. Retailers must weigh the price of the system to the amount of losses through theft.

The cost of return fraud has an impact not only on retailers but on employees and government coffers, according to the retail federation study. Retail jobs lost due to the costs of return fraud total more than 600,000, and total state sales tax revenue lost to return fraud is in the hundreds of millions.

This article was originally posted on December 4, 2013 and the information may no longer be current. For questions, please contact GRF CPAs & Advisors at marketing@grfcpa.com.