Profile of a Dishonest Employee

The old saying goes, “You can’t judge a book by its cover.” But in the world of fraud, that may not be the case.

Similar characteristics turn up time after time among fraud perpetrators, according to the Association of Certified Fraud Examiners’ 2014 Report to the Nations on Occupational Fraud & Abuse, a biannual study of occupational fraud cases worldwide.

Although an employee may possess one or more of the following traits or characteristics, that is not reason to suspect them of committing fraud. 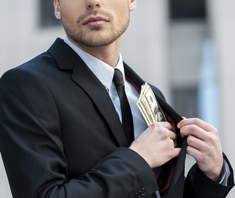 Profile of a Dishonest Employee

All other considerations must be taken into account, along with the evidence implicating the employee.

The report revealed these common traits or characteristics of employees who commit fraud:

There are some behaviors that are overwhelmingly present among those who steal from their employers.

The biggest one, by far, found in 44 percent of cases, is that the employees are living beyond their means. They own homes, cars and other property that employees in their positions could not normally afford. They may also take luxurious vacations.

The second hint that someone may be tempted to steal is that they have been having financial struggles that seem to be getting worse. One-third of all the offenders in the fraud study had financial difficulties.

Many are “wheeler-dealers” or may be seen as “control freaks.” They typically will have a high confidence level, bordering on narcissistic.

Another situation that raises a major red flag is for an employee to have an unusually close relationship with a vendor or regular customer. This situation happens in 22 percent of cases.

In addition, other characteristics that are prevalent with those who have been caught stealing from their employers include:

An overwhelming number of employees who commit fraud – 93 percent – have no prior criminal record or history of a fraud-related offense, so it is difficult to pinpoint offenders before it is too late.

The presence of these characteristics does not, in and of itself, signify that an employee is committing fraud or will in the future. These are just the common traits and characteristics that are found in many perpetrators of fraud.

This article was originally posted on September 9, 2015 and the information may no longer be current. For questions, please contact GRF CPAs & Advisors at marketing@grfcpa.com.

How Do Other Nonprofits Communicate with Donors?