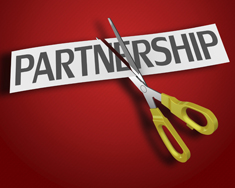 Business partnerships have been compared to marriages – and never is that more apparent than when they come to an end. Without a solid agreement and valuation plan, the situation can get very messy.

Lacking a concrete path forward may eventually involve the courts and years of litigation as a Wisconsin company discovered. In the case of the Estate of James H. Matteson v. Robert R. Matteson et al, the partners lacked a written agreement concerning terms for parting ways. Half-brothers, the Mattesons owned a communications company that sold and serviced radios and related equipment.

The court made it clear in its decision that one of three things can happen without an agreement:

2. One partner can force a windup, meaning the company is liquidated.

3. The outgoing partner can sue to force a settlement and will be entitled to a share of earnings until settlement is reached.

Obviously the costs and stress of litigation and the ill feeling accompanying such a course of action are best avoided. But, as in a marriage, new partners are often reluctant to face the fact that their union may not last. After all, successful partnerships are built upon working together for mutual success. That said, defining terms of an exit should be completed up front, including how the value of partnership shares will be determined.

Valuation methods include assessing book value, cash flows, earnings, sales, profits or capitalization of income or dividends – or a combination of methods. Sometimes a projected liquidation value is used.

Depending on the industry, some methods make more sense than others at arriving at a fair value. The method and process should be agreed upon in the partnership agreement, as well as how a valuation professional will be selected. Often the process is approached as if the company will be sold with the resulting value assigned to the partners according to their ownership percentage.

Specific issues affecting valuation and determination of value include the following:

Goodwill – Is it personal or professional? In the case of partnerships offering services, such as law firms or health services, it is important to figure out if goodwill is tied to individuals or the company. If clients or patients will follow when the partner leaves, then goodwill is personal. If the reputation of the company is stronger than that of any individual partner, then it is associated with the business and therefore an asset.

Book value – Will book values of assets be what is shown on the income statement – for example, cost minus depreciation – or will values be adjusted to the current market? This should be specifically stated. In many cases, book value understates the true value of the asset, for example with equipment that has been fully depreciated or real estate in a rising market.

Control – Another factor influencing value is control. If a partner has little or no control over company decisions, then that affects the value of their interest. The argument can be made that since they didn’t have control of company direction, they shouldn’t benefit equally from the success of those decisions. Passive members or silent partners are treated differently than active ones.

Statement of earnings – Most companies seek to minimize taxes and therefore financial statements reflect aggressive income reduction tactics. In determining net profits, are these statements to be used or are they to be recast to reflect true performance? An example might be accelerated depreciation or Section 179 expensing that reduces net income significantly. In the case of a valuation, this might understate profits, cash flow and market value of assets.

Taxation issues – Discrepancies between how the IRS would value an interest versus how the partnership does should be resolved. In some cases, former partners or their estates have been taxed for a higher value than they received.

In summary, business valuation methods and procedures should be an integral part of any partnership agreement. Working with professionals for periodic valuations will help partners stay abreast of what their interests are worth, allowing them to prepare should one of the partners exit. This is essential for the continued viability of the company.

This article was originally posted on July 20, 2015 and the information may no longer be current. For questions, please contact GRF CPAs & Advisors at marketing@grfcpa.com.

How Do You Report Suspected Tax Fraud?